What Kind of Evidence is Admissible in Court?

The type of evidence and how the prosecution presents it in court can be the difference between a guilty verdict or being cleared of all charges. With the stakes so high, attorneys put deep thought into what evidence to show in court and how the judge and jury may receive it.

As the defendant in the criminal case, it is your defense attorney’s responsibility to scrutinize the evidence and assert the proper motions to ensure that you are not unfairly prosecuted. Although you are not expected to be aware of the specifics regarding evidence, it can work in your favor to be able to differentiate between admissible and inadmissible evidence.

Evidence in a criminal case can range from a DNA sample to cell phone records. While it can take various shapes and sizes, all evidence falls into one of the following categories:

To the average person, all evidence may seem to work against the defendant, but in all actuality, evidence can also serve the purpose of proving the defendant’s innocence. This type of evidence is known as exculpatory evidence. The prosecution is responsible for informing the defendant and his or her legal counsel that it exists before they enter a plea.

If the prosecution fails to do so, your criminal defense attorney can file a motion to dismiss the charge or appeal a guilty verdict that may have resulted from them withholding such information. 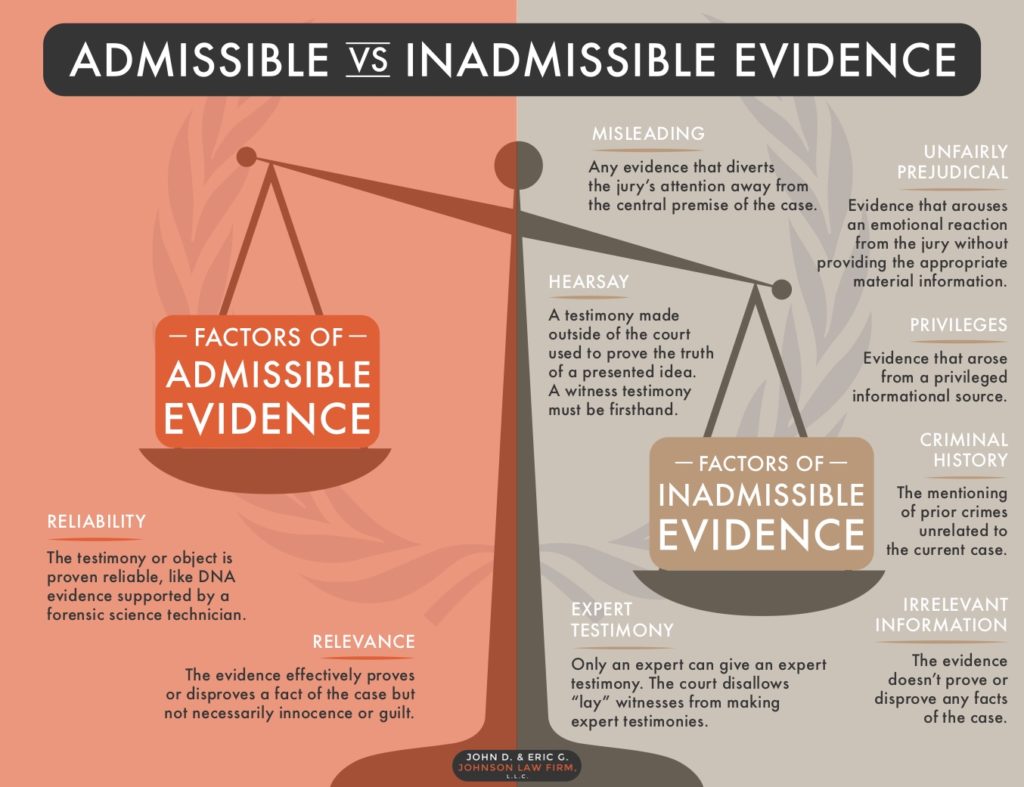 The prosecution presents evidence to the court that they believe can prove the defendant’s guilt beyond a reasonable doubt, but that evidence must first be deemed admissible by the court. The admissibility of evidence rests solely on two major factors:

Anyone who wishes to have their evidence admitted into the court must ensure that the evidence satisfies both of the prerequisites mentioned above.

While the rules of admissibility are generally straightforward, the factors of inadmissible evidence are a bit more extensive. One can easily conclude that the court will deem any evidence that is neither reliable or relevant as inadmissible, but there is much more to consider as well.

The court will deny any evidence that is any of the following:

Inadmissible evidence cannot be used in court during a trial, but it may sneak through if not caught beforehand. It is for this reason why it is highly beneficial to have an experienced criminal defense lawyer to review and analyze all pieces of evidence ahead of trial proceedings.

How to Get Evidence Thrown Out of Court

Now that you’re aware of what evidence is and is not admissible, how does one go about getting evidence thrown out of court? This is a question that many defendants in criminal cases have and the answer is not as complex as one may believe. To have evidence thrown out, your lawyer must file a motion to suppress before trial.

The motion is a request to the judge to toss out or “suppress” a specified piece of evidence. The judge can rule on the request immediately or set a date for a hearing at which he will issue his decision. If the judge decides to hold a hearing, both attorneys will be provided the opportunity to present their arguments and cross-examine one another.

If the judge ultimately rules in your favor, the evidence in question will be “suppressed,” effectively disallowing the prosecution from using it as a part of their case against you. If the specific piece of evidence was crucial to determining guilt, the prosecution is likely to drop one or multiple charges if not the entire case. At the very least, it may result in the prosecution offering a more favorable plea deal.

How a Louisiana Criminal Defense Lawyer Can Help

Knowing the difference between admissible and inadmissible evidence means very little if you lack the legal representation needed to get it thrown out of court. Louisiana criminal defense lawyer Eric G. Johnson of the John D. & Eric G. Johnson Law Firm has experience mitigating charges for clients through negotiation and filing the appropriate motions.

Eric also understands the importance of analyzing presented evidence while also bringing forth evidence in favor of his clients and can do the same for you. Contact us today at 318-377-1555 for a free case evaluation.

What kind of evidence is not admissible in court?

The court will deem any evidence that is neither reliable or relevant as inadmissible.

What are the requisites for admissibility of evidence?

The admissibility of evidence rests solely on two major factors: reliability and relevance. Anyone who wishes to have their evidence admitted into the court must ensure that the evidence satisfies both of the prerequisites mentioned above

What does inadmissible evidence mean?

Examples of inadmissible evidence that the court will deny include: hearsay, misleading evidence, unfair prejudicial evidence, expert testimony from a “lay” witness, and irrelevant information.